As the world population grows and new industrial and developed areas expand, both in absolute and relative terms, the linear economy will have a shortage of supply of materials, including food. This shortage may lead to economic hardship, human suffering, and conflict. A circular economy is restorative and regenerative by design and aims to keep products, components, and materials at their highest utility and value at all times.

The higher the recycling and re-usage of waste in an industrial foundation, the more it comes in-line with the concept of the circular economy while being less harmful to its surroundings and more profitable. The very closely related concept of “bio-economy” focuses on the utilization of biomass in primary production processes in forestry, fisheries and agriculture, and increased utilization of raw materials used. Thus a transition to bio-economy with the use of biogas will lead to the economy being more circular than linear.

Biogas is obtained from anaerobic digestion process, a fermentation process that takes place in a closed airtight digester where organic raw materials such as manure, food waste, sewage sludge, and organic industrial waste are converted into biogas and digested as products. The produced biogas is a mixture of 50-70% methane and 30-50% carbon dioxide and smaller amounts of water vapor, hydrogen sulfide, and other minor components and trace elements. The wet digestate results from anaerobic digestion of substrates pumped out of the digester tank, after the extraction of biogas.

Very simple biogas digesters have been in use in China, India and many other Asian countries for many years. Industrial applications of biogas production started well over 50 years ago as a means of stabilizing sewage sludge at wastewater treatment plants. The biogas industry expanded in the 1970s and 1980s as increased production of different organic materials (such as manure and industrial wastewater from sugar refinery and pulp mills) became more widely used. Starting in the mid-1990s, extraction of landfill gas (low-quality biogas) came to the fore, along with the construction of farm-based biogas plants and anaerobic digestion of solid wastes from the food industry and food waste. After the 2000s, there was an increased interest in biogas, so the construction of farm-based biogas plants took place, and an industrial sector was established.

The multiple functions of bio-gas in a circular economy:

Biogas, made from organic waste streams, does not add to the carbon dioxide load in the atmosphere. Carbon dioxide produced during the combustion of biogas is offset by either the carbon dioxide consumed by the biomass, which is digested. Biogas is thus a “green” sustainable energy vector and has a significant role in shifting to a sustainable decarbonized society. Biogas has many uses in a sustainable society and can be utilized in a broader perspective that isn’t in practice today. Industries, as well as households, can use biogas for heating and hot water supply. Biogas can be used to supply warm air for drying, for example, in laundries, carpentries, industrial coating facilities, and other places where there is a need for fast and efficient drying. The exhausts from upgraded biogas combustion are clean and do not generate odors or particles.

The most common use of biogas is in a non-upgraded form for the production of electricity and heat. The default use of biogas is for CHP (Central Heat and Power) production, which is the production of renewable electricity and heat, also known as co-generation. The heat from the CHP engine can also be used to drive an absorption chiller to give a source of cooling, resulting in a combined cooling, heat, and power (CCHP), also known as tri-generation. The utilization of renewable heat is essential, as it brings about significant additional economic and environmental benefits, on top of the use of biogas for renewable electricity production.

Raw biogas can be upgraded in a process that removes hydrogen sulfide, water, particles, and CO2 present in the gas. The process creates a gas consisting mainly of methane and thus increases its energy content. Clean upgraded biogas is used as fuel for cars, buses, and trucks of various sizes. In several countries, there is a well-developed infrastructure for vehicle gas, and it is possible to fuel natural gas vehicles (NGVs) in the most densely populated areas of such countries. Today, vehicle gas like CNG, LPG is used mostly for buses, trucks, and passenger cars. 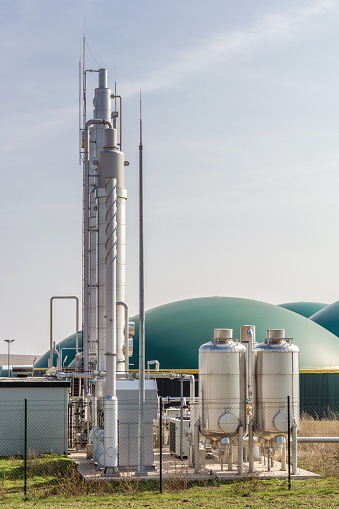 Biomethane from renewable sources is fed into the national transmission network for natural gas in several countries.

One of the main reasons for a transition from fossil energy and fuel to renewable energy and fuel is the reduction in greenhouse gas (GHG) emissions. The production of biofuels and bioenergy contributes to a significant reduction of GHG emissions. In many areas around the world, organic substances, considered waste, are still deposited in landfill sites where they decompose, releasing methane (CH4) with a global warming potential (GWP) 21 times that of CO2. When these streams of organic waste are redirected from landfills to a biogas facility, a significant reduction in methane emissions from landfills occurs.

Intensive agriculture is one of the major greenhouse gas sources worldwide. These emissions are associated with enteric fermentation, management of manures and production of synthetic fossil fuel-based fertilizers. Anaerobic digestion systems remove the easily degradable carbon compounds in feedstocks, such as slurries, and converts them to biogas. When the remaining digestate is utilized as biofertilizer, the slow to degrade carbon is recycled back to soils, contributing to the build-up of the humus content of soil and improves its long-term suitability for agriculture. Macro and micro-nutrients contained in the digestate are predominately in mineral form, which makes them easily accessible to the plant roots, compared with nutrients in raw manure and slurry, which are mainly organic compounds, and must be mineralized to be up-taken by the plants. As such digestate has a higher nutrient uptake efficiency compared with raw manure and slurries.

Organic matter in digestate can build up the humus content in the soil; this is a benefit unique to organic fertilizers, which is particularly crucial for arid and semi-arid lands with low carbon content. The destruction of weed seeds in the AD process is another significant benefit to organic farmers.

Fossil energy is still in abundant use around the world. This energy comes in the form of coal, oil, and natural gas from a relatively limited geographical region and is used worldwide. Many countries are thus dependent on a few countries for energy supply. A transition to a bio-based/renewable energy production system would better balance the energy supply situation around the world; more countries and regions would be able to become energy self-sustainable.

In a sustainable society, where resources are used efficiently, what previously was considered to be waste is instead included in a production circle where organic material and nutrients such as nitrogen and phosphorus are returned to the soil to replace chemical fossil fuel sourced fertilizer. When digesting municipal and industrial food waste, such as waste from supermarkets and restaurants or slaughterhouse waste, biogas is produced, and valuable nutrients accumulate in the digestate where they are easily used as fertilizer. One ton of digested food waste produces 1200 kWh biogas energy, which is enough fuel to drive 1900 km with a gas-fueled car. The food waste from 3000 households can fuel a gas bus for a year.

Some countries already have targets for energy recovery from food waste. For example, the Swedish government has a target that at least half of all generated food waste from households, shops, and restaurants be separated and treated to recover nutrients and that 40% is processed to recover energy by 2018.

The biogas plant itself is not labor-intensive, but it can create new business opportunities in rural areas that otherwise suffer from depopulation. Through collaboration with different farms, the biogas plant can create diverse job opportunities along the process chain, such as raw material cultivation and collection. By increasing local energy production, income stays in the local area instead of going to global energy markets.

In the future bio-economy, wastes will be transformed into high-value products and chemical building blocks, fuels, power, and heating; biogas facilities will play a vital role in this development, and in the implementation of the novel production paths that arise in the transition to a bio-economy.

The future of the biogas facility is a factory where value is created from previously wasted materials. This ensures the sustainability of the environment and the potential for financial gain for the local community. The flexibility of the anaerobic digestion system and its ability to digest a multitude of organic feedstocks, while producing a significant range of products ensures the role of anaerobic digestion and biogas in the circular economy.